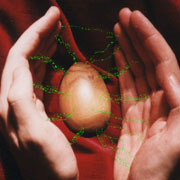 The World is in Your Hands •

Hands shown enclosing an inner symbol, as on the right, have become a symbolic cliche for safety and protection.  In this image I have deliberately employed an overabundance of symbolism both to use it and to poke fun at an overly serious interpretation.  Wood, of which the egg is made, because of its association with trees like the hands conveys all the right-on values I want.  An egg suggests new agey /  new lives / emerging topics.  Yet the symbolism clearly doesn't hold together as a congruent Gestalt, it's absurd.  What's the green lightning doing? Will a wooden egg ever hatch and aren't those hands if anything warming themsleves on the egg rather than the other way round?  Stay tuned to find out. 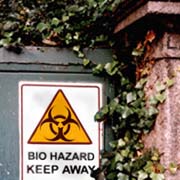 This section has topics on hazards to the environment and health.  Hazards to our personal environment and our health.  Corporate greed can be a significant factor leading to these hazards - another is lack of knowledge:

"I do not know what I may appear to the world; but to myself I seem to have been only like a boy playing on the seashore, and diverting myself in now and then finding a smoother pebble or a prettier shell than ordinary, whilst the great ocean of truth lay all undiscovered before me."
Isaac Newton, circa 1676.

Newton's 'edge of the ocean' metaphor is particularly apt for describing scientific understanding of how biological systems function.   Scientists understand a great deal, but it is a drop in the ocean.  Biological hazards, such as the spread of DDT into the food chain, arose in part because of a lack of knowledge. 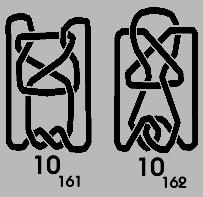 The two knots shown on the right, knots 10161 and 10162 come from a postgraduate course on the mathematical theory of knots.  The two knots were in an early systematic knot catalogue.  They are both from the section of the catalogue for knots with ten crossovers.  For fifty years the two knots were thought to be quite distinct.  In fact one knot can be turned into the other by rearranging the parts.  They are equivalent knots.  The pair of knots is now known as the 'Perko Pair'.  After fifty years one knot had disappeared.

Your Life is in Your Hands •

Section Title:
"Life History"
Contains:
Topics about how things and our perceptions of them change over time;

Perhaps there is more truth in the idea that you can read someone's past, future, health and love life from their hands.  There is a wealth of genetic information in the whorls and minor creases - and the callouses, skin surface and muscle tone tell something of the person's life.

It is said to be possible to read the state of ones health and even to diagnose cancer from changes in the skin of the hands.  Certain parts of medical palmistry are even an accepted part of established mainstream medicine, from the evidence of genetic abnormalities that can show in fingerprints, to the diagnosis of disorders of circulation that can be seen from the state of the hands. Whatever the truth or otherwise of palmistry one can certainly tell a lot from the hands.

The image on the left is certainly unusual.  The hand shown is pretty close to having a single transverse crease, the so called 'Simian line' - found in people with chromosomal abnormalities but also denoting extremism, single mindedness and tenacity of purpose.  The outstretched thumb denotes a self-confident personality, and the way the fingers are spread indicates Vulcan ancestry.

"I thought scientists weren't superstitious, so why then do you have a horseshoe over your laboratory door?"

"You're right, I'm not superstitious - but I am told that horseshoes bring good luck even if you don't believe in them."

The horse shoe (correct way up) has long been a good luck charm.  Perhaps someone could e-mail me and tell me why?

The traditional game of horse shoe throwing lives on in Dublin  This photo is taken from the Ballsbridge horse-shoe pitchers' club's grounds down by the river Dodder.  Another horse-shoe pitching club's grounds are further up the river near Herbert Park.  The game of skill also has a following on the other side of the Atlantic, try for example www.sandpit.ca. 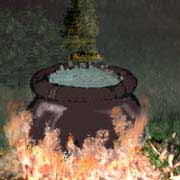 Section Title:
"Hubble Bubble"
Contains:
Polemic topics on what's wrong with the way we do things;

Of the images on this page, the cauldron image on the left was by far the hardest one to get.  Initially I went surfing on the web for 'Cauldron', but the few images I found weren't really what I was looking for. The best one I found was a piece of clip art that looked really out of place amongst the photos. It sufficed for quite a while, but eventually I got around to faking the image you can see here. Although not photographic, it doesn't look too out of place amongst the other photos. The secret to it is that it uses colour mixes from real photos. The fire below the cauldron comes from a bonfire at a Hungarian szalonnasutes. The colours of the bubbling water in the cauldron are from the waves off the West coast of Ireland (with a dash of green).

The remaining problem was that colour boundaries came out too sharp. Adding blur just made the boundaries murky. However, using the 'disolve' tool to overlay one area on another solved the problem. The usual trick of working with the image at a higher resolution than the final presentation meant I didn't have to worry about anti-aliasing. So, not a photo, but the next best thing.

The idea of having a 'Trouble With' section to alt.thinking.hertz came from Babette Cole's children's books, 'The trouble with mum', 'The trouble with dad'... series.  These books are a lovely combination of humour and fantasy and are as much fun for an adult reading them to children as for a child being read to. 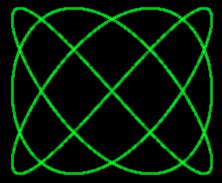 Section Title:
None - The Lissajoux figure is the icon for "Thinking Hertz"
Contains:
An interaction of waves

The two green on black images are Lissajoux figures. They are the kind of pattern you might see on an oscilloscope screen.  You also get a similar pattern from a pendulum that can swing back and forth as well as left and right.

On the oscilloscope screen, if the frequencies are close to but not at some exact ratio to each other the Lissajoux figure will appear to 'rotate' in three dimensions.  If the ratio is close to one, i.e. both frequencies nearly the same, you get a circle which slowly flattens into an ellipse, a straight line and then broadens again into a circle and the sequence repeats. 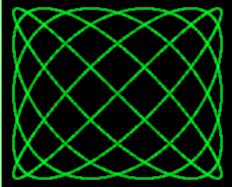 I chose to use Lissajoux figures to illustrate waves.  Visually they tie in with the 'Perko Pair'.

Waves are fundamental to the 'Hertz' in the virtual newsgroup title.  In honour of Hertz's discovery of radio waves, the SI unit for measuring the frequency of a wave is called the Hertz.  One Hertz is one cycle per second and in turn this is where the 'Mega Hertz' in computer processor speeds (Millions of Hertz) come from.  The processor's 'Mega Hertz' measures the frequency of the 'clock' waveform that drives the processor.  The higher the frequency, the more steps of processing take place within one second.

e-mail james@catalase.com if you would like a Lissajoux screen saver.